e(fx)clipse 1.0.0 is just around the corner and scheduled to be released on August 15th, while we are polishing the final bits, the Eclipse IP-Team checks our IP-Log, … .

I’d like to introduce you the new and exiting features that we worked on in the last months since we released 0.9.0 in February.

Other posts in this series are:

We’ve been experimenting with the new Text-API part of OpenJFX8 since its inception in the first weekly builds. In the 1.0 cycle we’ve moved the code from an external repository to e(fx)clipse and improved it adding support for:

The API is not yet complete and there are many many many features missing but you can already build really cool and fancy IDE like applications. The control still has some bugs but we decided to include the current version so that you can give it a spin and provide feedback or even contribute fixes, features, … . 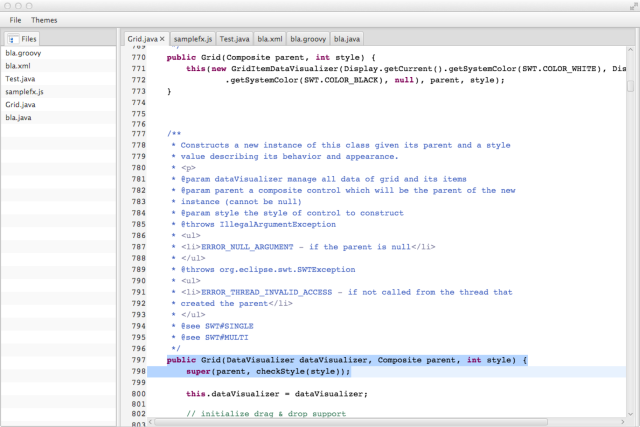 and because all colors are not hard coded into the the UI nor set in preferences like in e.g. in Eclipse you can flip the theme and your editor will renderer in a dark theme like this (I used the same colors as IntelliJ IDEA in Dracula mode)

The cool thing about the syntax highlighting is that you need to write (fairly) no code because we have a DSL defined via Xtext who allows you specify the highlighting rules to apply. Look for example at this groovy-file

and the specification of the highlighting 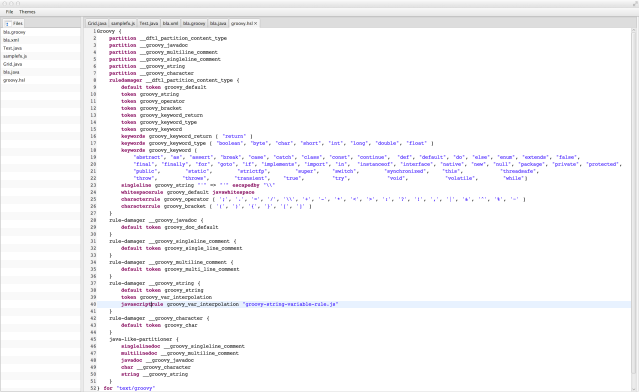 You notice that the token names simply match the CSS-Class-Selectors used!

Above I said there’s fairly no code you need to write because for complex rules like the variable interpolation in groovy strings we require you to write some JavaScript and we use Nashorn to load the rule definition which looks like this for variables inside strings.

This entry was posted in e(fx)clipse and tagged release efxclipse 1.0. Bookmark the permalink.