I gave some talks at EclipseCon about our e4 renderers for JavaFX and showed of how the our renderers are built and different to those you find in the SWT implementation coming with Eclipse. 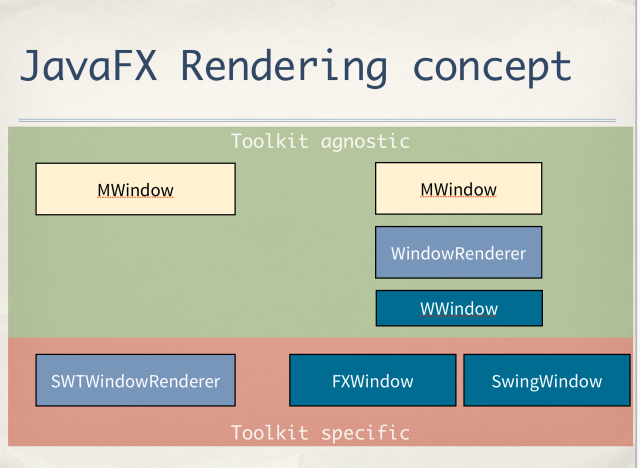 On the left you see how the SWT one works and on the right handside how the JavaFX one is structured. The cool thing is that all the complex logic with lazy activation, … is implemented in an toolkit agonostic way and abstracted throught W*-Interfaces (git-repo).

Here’s an example of the WWindow abstraction we are using:

That’s the whole interface you need to implement. Back to EclipseCon so showed off this concept and on the last day I was approach by a guy who immediately recognized that this renderering can be used to renderer with other UI-Toolkits like FX as well.

He’s been interested in a Swing one! He asked me for an estimate how much time it would take to get such a thing going and I answered: “Not more than a week”. He could not believe that is doable so had to proof it to some extend!

All the conversation happened before the start of a talk and I have to confess I don’t know anything about what the talk was about because I started hacking right on a Swing renderer, and before the 35 minutes talk had been finished I could show him this little app.

The most of the time it took to implement the bootstrapping of the OSGi-Application (25 minutes) implementing the SwingWindowWidget was a simple task. If you happen to be in need of a e4 on Swing-Renderer I’d suggest you take a look at the prototype I hacked together in 30 minutes.

I’ve pushed the code to an extra repository for now (it is not part of the e(fx)clipse code base donation to Eclipse.org).

We (BestSolution.at) currently have no plan to develop any Swing-Renderers but if you are interested in doing so or want to hire us to do it for you just get in touch with me because 99% of the code builds the foundation for our JavaFX renderer story (where we provide commercial support) a swing implementation automatically inherits all improvements and bugfixes we are implementing.

Before someone asks: Yes I know about Kai’s prototype doing something similar but he approaches the problem in a different way. In our case being able to implement Swing renderers is only a (nice) side effect of our rendering design concept which makes it super easy for you to implement custom JavaFX renderers (e.g. writing SWT-Renderers with our engine would/will never work!)

This entry was posted in e(fx)clipse. Bookmark the permalink.