In fact it’s been 2 weeks since my last blog entry about the progress that’s been made in e4. So what has happened in this 2 weeks:

Kai Tödter and Boris Bokowski presented e4 at Jax2010 in Mainz. It is of real importance to tell the community about e4, which expectations they should have and more important which one they should NOT. The release we’ll ship this summer is an Early Adopter Release which though stable can’t be compared to the stability and feature richness of Eclipse Helios (and the 3.6 Release of the platform).

One of the first nice things that’s been added is the support for Perference-Injection using a new @Preference-Annotation. So if you need access to a preference in your Part-Class you can now write:

One of the quite interesting things of Eclipse is the concept Perspectives and shared Parts between them. This is quite interesting from the point of the rendering framework because you suddenly don’t have a simple UI-Tree but one with Shared-Subtrees. I don’t go into details how this is solved but only let you know that this feature is now available in the latest builds.

I’ve been using the Eclipse 4.0 Early Adopters stream in the last few days a bit to work on e4-Samples and although it works, it’s sometimes a rough ride and I’d say productivity is 70% of the one I have with the 3.x stream but I’m still confident that at the time we ship it most of the problems are fixed (e.g. unconstrainted c&p in Dialogs).

Initial support for Drag and Drop has been added but it’s still a bit rough to use and often completely destroys your Workbench-Layout.

Beside fixing bugs I added the following new features:

IMHO one of the coolest features of the Eclipse Platform 4.0 is that if the Application Model coming with it by default doesn’t suite your needs you are free to extend it and add support for features you need to have in your specific application.

To extend the e4-Application Model you use standard EMF-Tooling (in the screenshot we extend the main Application-Entity and add new feature). To make the Model-Editor aware of such new Entities and Features I introduced an extension point which allows external parties to extend the Base-Editor.

Take a look at the 2 editors where the upper one views an extended Application-Model whereas the lower one displays a default one.

With single sourceing I mean that one writes a NATIVE e4-Component and runs it unmodified in: 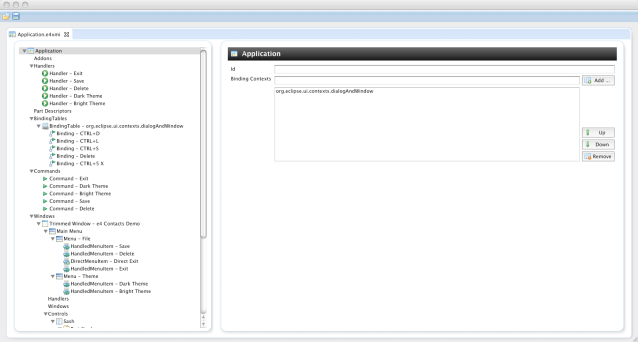 I’ll describe in more detail in another blog post hopefully soon how I managed to make an e4-Component live other environments but for the ones who can’t wait.

The trick here is that the I’ve written an EditorPart-Implementation which makes the e4-Component believe it is running in an e4-Application (I simply set up such a virtual e4-Application-Context-Tree inside 3.x or inherit the compat-layer ones in 4.0).

This makes my Eclipse SDK 3.x / 4.0 integration look like this:

So the Component URI which is in an e4-Application part of the application model is passed to a generic E4CompatEditorPart which holds all the magic and because the CSS-Themeing is applied to 3.x, 4.0 and native e4-applications (see here how and why this possible) my editor looks and behaves the same on all 3 platforms.

This entry was posted in A week at e4, e4. Bookmark the permalink.

2 Responses to A week at e4 – Share me please