The RCP-Application
With this article we are starting to write our RCP-Application which uses Eclipse-Databinding. I’m not going into detail how you create an RCP-Application (I simply use the PDE-Wizard) but assume that you are familiar with this kind of thing.

Still I’d like to describe the application design and the reason behind decisions I made a bit. The first and most important thing is that I’m not a fan of EditorPart and I think for none-file resources the IEditorInput stuff simply doesn’t make a lot of sense so all applications I’ve written since I develop RCP are ViewParts.

A misconception I often see when I say that my RCP-Applications are free from editors is that people ask: “How are you going to be part of Workbench-Dirty/Save-Lifecyle if you use a ViewPart?”.

The answer is quite simple the only thing you have to do is to make your ViewPart implement ISaveablePart2 and then your view is part of the workbench-dirty state lifecycle. 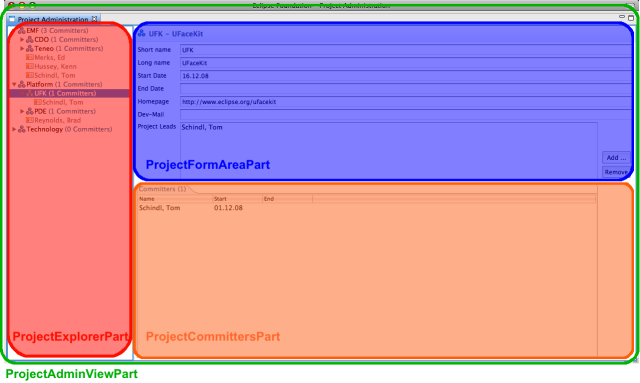 The screen shot from above shows that how the applications UI code is broken up in smaller logical parts:

Before we dive into the main topic of this blog post I’d like to show some interesting code found inside the ProjectAdminViewPart because it shows some interesting RCP features and introduces a small but often forgotten databinding stuff leading to memory leaks in conjunction with databinding.

Restoring view state information
The first interesting thing is that the content of the main area is created using a SashForm to give the user the possibility to define how much space the left part should occupy. The user naturally expects that when he starts the application the next time that the UI comes up in the same state it’s been when shutting down so we need to store the sash-weights when shutting down and restore them on the next start up.

The Eclipse-RCP-Framework provides a possibility to make this happen by using an IMemento to persist informations across application launches the only thing you to do is to use the API:

Avoid listener leaking
There’s something I very often see in databinding code from various people (even those who have a lot of databinding knowledge) is that they are not diposing their observables once not more needed which leads to memory leaks. This means that we have to remember all observables created and dispose them manually when not needed any more.

An exception to this are observables created for SWT-Widgets because they dispose themselves when the SWT-Widget is disposed but for all others the rule is the one who created it has to dispose it. Databinding provides a class named ObservablesManager which helps you with this.

In 3.5 EMF-Databinding added new API to ObservableManager which would make collecting observables very easy but apparently a bug was found very late in the release cycle and so the API is not useable currently. The API in question is used like this:

Though the default API is broken for EMF-Databinding we can add an easy fix so that the API at least collects all IEMFObservable so that we only have to deal with things like ComputedValue and such stuff because as stated above SWT-Observables dispose themselves when the SWT-Widget is disposed.

Setting up a TreeViewer
Enough about the generic stuff and let’s now concentrate on the main topic of this blog.

Though I guess most of you know how to set up a standard TreeViewer here a short description:

Createing the content provider
The Eclipse-RCP-Platform comes with a plugin named org.eclipse.jface.databinding which provides databinding support and implementation classes for SWT and JFace controls. One of those classes is ObservableListTreeContentProvider which is a class implementing the ITreeContentProvider and makes setting up an observed tree quite easily.

The ObservableListTreeContentProvider can’t do all the work on its own but expects us to provide it helper classes:

Looking at the picture above shows us that our structure is a bit of an virtual one when we compare it to the domain instance where we would only see the project-subprojects relation on the first sight.

Our viewer though displays to different multi-value features as children in the Tree:

Displaying different Object-Types was not supported in 3.4 and is a new feature in the new Databinding implementation as well as the possibility to combine 2 multi-value features into a single observable list which is for me personally one of the coolest features in the Properties-API.

JFace-Databinding doesn’t provide an implementation for StyledCellLabelProvider out of the box so I had to write my own one but that’s not too hard. The only thing which has to be done is to attach a listener to IObservableMap(s) to observe attributes of all tree elements and update the viewer if one of them changes.

The last step is to set the input of the viewer which has to be an IObservableList which is in our example all top-level projects who are restored in the foundation instance.

There is even more code in the ProjectExplorerPart e.g. a customized ColumnViewerToolTipSupport to create the nice looking ToolTips when hovering items of the tree as well as some RCP-Code to allow plugin.xml to contribute a context menu but that’s standard JFace and RCP code.

This entry was posted in EMF, Tutorials. Bookmark the permalink.